By running4rwanda - February 24, 2009
Blackpool in February was as I expected it to be - bracing ! And deserted, apart from the 1500 hardy souls who'd made the trip for a flat, and sometimes fast, half-marathon. The course is not inspirational - 2 laps of what is basically an 'out and back' cours 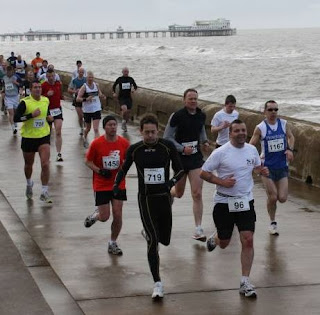 e: the 'out' leg is pancake flat, along the Lower Walk - the sea wall (see picture - that's me on the far right); the 'back' leg is along the Middle Walk - higher, and more undulating.

As it turned out, times were good - lots of PB's and season's bests - helped by the cool conditions, and the breeze which was from the side rather than being head-on.

On a fund-raising note, I managed to raise some funds off-line, which will go to maternity projects in Shyira, Rwanda - sponsoring a midwife, support of safe motherhood and funding the extension of the maternity hospital. (More details on the 'Rwanda' side of the blog). More importantly, I have received some feedback, so am raising awareness of this site, and the work of the Shyira Trust
GNW half marathon

Popular posts from this blog

By running4rwanda - February 06, 2022
It has been a while since the last post, and a lot has happened in the meantime. I'll try to catch up as best I can, but beware that some of the links on this page may no longer work - especially any 'appeal' or 'donate' links. Please bear with me while I get them cleared up. Thanks
Read more