Showing posts from 2013
Show All 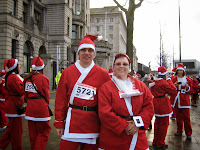 So that's it for another year - the 10th Liverpool Santa Dash has been and gone. As usual it was the usual mix of athletes, fun-runners, walkers and people just out to raise money for their favourite cause. And what a mixture it was - adults, children, people pulling sleighs, dogs dressed as reindeers, men dressed as fairies, people calling at pubs for mid-race refreshments - you name it, Liverpool Santa Dash has it all, and here are some images to prove it. The jury is still out on whether the 2013 Liverpool Santa Dash has reclaimed its crown as the biggest Santa Dash in the world, but one thing is certain - a lot of money was raised for good causes, and a lot of people will be back next year for more. The amount raised for safe motherhood and maternal health projects in Rwanda currently stands at £170 plus Gift Aid, with some more still to come. Online donations are still welcome at www.bmycharity.com/santa2013 and every penny raised, plus Gift Aid, will go towards the saf
Post a Comment
Read more 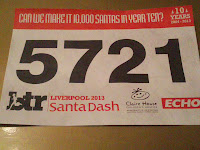 Well it's not number 1 or 2 which I've had in previous years. It's not even number 13, which I've had twice! This year's number is 5721! Nothing special then, except that it shows just how popular the Liverpool Santa Dash really is! And there are still a few days to get those numbers up to last year's figure of over 8000. If past years are anything to go by, there will be a couple of thousand entering in the last week, so the record is within reach. Most will be running for charity, and some will be running for Rwanda. If you would like to help us to support midwifery training, maternal health, and safe motherhood projects in Rwanda, please sponsor us at www.bmycharity.com/santa2013 Thank you for your continued support. Without people like you, we would not have been able to achieve the things we have done over the last 12 years.
Post a Comment
Read more

By running4rwanda - November 22, 2013
If you are thinking of entering Liverpool Santa Dash 2013, there is still time to enter in person, but online entries closed at mid-day on November 20 th . You can enter in person at btrLiverpool's office at Hatton Garden. In the run-up to the 2013 Liverpool Santa Dash, btrLiverpool's office is open Monday to Friday, from 9.30am to 5.30pm, and on Saturday30th November, from 9.30am to 4.00pm Get your skates on - then get your Santa Suit on !
Post a Comment
Read more 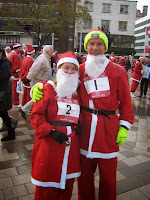 It's back! Liverpool Santa Dash - the biggest Santa Dash in Britain, and maybe the World ! From humble beginnings in 2004, the Liverpool Santa Dash has grown year on year to become the phenomenon that brings over 8000 Santas to the centre of Liverpool. And for 2013, the biggest and best has got even bigger and better - the Liverpool Santa Dash 2013 has once again teamed up with ITV's Text Santa appeal, and is aiming to bring over 10000 Santas to the centre of Liverpool raising funds for charity. Once again, I will be running for Shyira Trust, raising funds for Maternal Health, Midwifery Training and Safe Motherhood projects in Rwanda. In previous years we have had a team, as many as 15, but this year there may be just me. However many we have running, we will have fun, while Running for Rwanda. If you would like to help, you can, and you have two choices - you can join me, get sponsorship, and we can all run for Rwanda. Or, to help me raise much-needed funds for Mat
Post a Comment
Location: Liverpool, Merseyside, UK
Read more

By running4rwanda - August 14, 2013
With a certain amount of irony, this year's trip to Shyira has been dubbed 'The Luxury Tour'. Starting in the early hours of Sunday 11th August, the team met up at Amsterdam's Schipol airport, ready for our flight to Kigali. Very much focussed on working in Shyira Maternity Hospital, the team consisted of Jane, a University Head of Midwifery, Chantelle, a Consultant Midwife, Keran, a hospital midwife, Jane, a neo-natal nurse, and Grace, a student midwife. And me. Arriving at Kigali in the evening, we were met by Robinah who had arranged some transport for us, and travelled with us into the city centre. We spent most of Monday with Robinah, changing money in Kigali, visiting the Genocide Museum, and generally acclimatising. We then met up again later for a meal at the Hotel Mille Collines (the hotel in the film 'Hotel Rwanda'). On Tuesday, we were met by Pastor Anthony and Augustin, who transported us to Shyira via Musanze. It was on this journey that &
Post a Comment
Read more

By running4rwanda - July 08, 2013
Not content with climbing Kilimanjaro in aid of Shyira Trust, now Chantelle Winstanley has taken on another challenge to support Maternal Health in Rwanda. On 4th August, she will be jumping on her trusty two wheels and taking to the streets of London and Surrey for her first road cycling sportif - the London-Surrey 100 - ridden over the course of the Olympic road race. As a novice cyclist, she sees the prospect of this huge event as both exciting and daunting! And if 100 miles of pedal power isn’t exciting enough, the week after the race she’ll be heading out to Rwanda to learn, share and work as a midwife with the people of Shyira. She says "I feel extremely privileged to be visiting the community to see first-hand how this small charity has transformed the lives of the people in this part of Rwanda". Like all visitors travelling to Rwanda on behalf of Shyira Trust, her trip is self-funded on a voluntary basis. Every penny raised by Shyira Trust goes to the intended p
Post a Comment
Read more 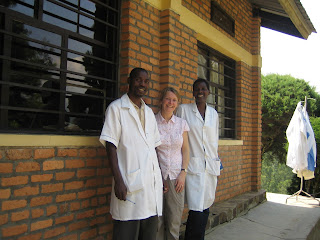 Jane Morgan from Formby has been awarded an MBE for services to midwifery in the UK, and the provision of maternity services in Shyira, Rwanda. Typically modest, she says “I was overwhelmed to hear that I am being given an MBE because I feel as though I’ve just being doing my job. I’m no good at shouting about my achievements, I don’t really like the attention, but it’s lovely to be recognised for what you do. This is a huge honour - it still hasn’t sunk in yet.” A trustee of the Shyira Trust, a small Formby-based charity, she continues “My life changed when I went to Rwanda in 2001, and I went to visit the maternity hospital in Shyira. I was completely unprepared for what I saw. There were five nurses, only one of whom was trained, and no midwives. There was no running water or electricity and it was filthy. The delivery room had a big hole in the window so everyone congregated outside and looked in during deliveries. And on the ward, mothers who had just given birth were mixed wi
Post a Comment
Read more
More posts