Showing posts from May, 2009
Show All

Windermere Marathon - one week on

By running4rwanda - May 24, 2009
So far, so good - I've started running again, with no ill effects. I had a few days rest, and started running again on Friday, and have been out again today. I'll try to get our every other day, but run very easily for the next couple of weeks, just to recover fully, before starting serious training or racing again. On a fund-raising note, it looks like I may get to about £400 - the latest figure will be updated via a Twitter update on the right of the screen.
Post a Comment
Read more

Windermere Marathon - the day after

Ow, ow, ow, ow, ow - I wish I lived in a bungalow ! If I thought it hurt yesterday, it hurts even worse today - especially going up and down stairs ! The picture on the left shows me going through Hawkshead, at about the 4 mile mark. At this point I felt comfortable, although I had probably started too fast - I was to suffer later ! I intended to run at 8 min per mile, which would have given be a finishing time of about 3 hrs 30 min. My first 2 or 3 miles were quicker than this, whereas I had intende d to start more slowly. In fact, most of the first half was run faster than target pace, but then when I did slow, I slowed with a vengeance, and I was counting off the last 5 or 6 miles. As it happened, the final time of 3:38 was quite reasonable, and I didn't feel too bad at the end (see right). If someone had suggested 3 months ago that I could run that time over that course, I would have laughed. Maybe I could do a half decent time over an easier course, and then maybe I'l
Post a Comment
Read more

By running4rwanda - May 11, 2009
All the training's done (almost), and there's less than a week to go, so I'm getting a bit nervous. I haven't done a marathon since the mid-Nineties, so how hard can it be ? I'm sure it will be OK on the day, but I won't be making any rash predictions, other than the fact that I will get round it, even if I have to walk. I'm sure it won't come to that, but there's a lot riding on it, so I'll get round no matter what it takes. Sponsorship currently stands at over £200, which will go a long way in Rwanda, but I'm hoping to get about double that before the week is out. See the Twitter feed on the right for the latest situation. As always, all money raised will go to Midwifery, Maternity and Safe Motherhood projects in Rwanda. We are committed to raising £10000 over the next 4 years, to pay for the training of the next midwife. The maternity extension will cost over £20000, but at the other end of the scale, £15 will pay for a Caesarean sectio
Post a Comment
Read more

By running4rwanda - May 06, 2009
First of a 5-race series, but too close to Windermere Marathon, so giving this one a miss
Post a Comment
Read more

International Day of the Midwife 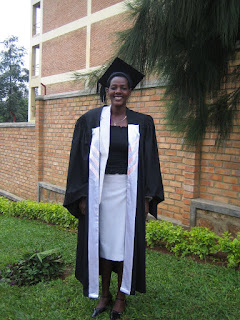 Well this is what it's all about - raising funds to train a midwife. And the picture shows the first fruits of our fundraising. Robinah was the first recipient of the scolarship set up to train a nurse, and this is her pictured after her graduation ceremony. She has now returned to Shyira to work, but because she is the only qualified midwife, she works long hours and is on call 24 hours a day, so the training of the next midwife is crucial. Please help us to raise £10000 over the next 4 years - support my appeal by clicking here Thank you for your support - any donation is welcome, no matter how big or small, and every penny received by Shyira Trust is used for the projects supported.
Post a Comment
Read more
More posts