Showing posts from 2015
Show All 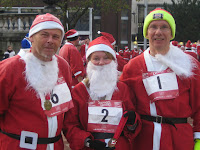 It's December already, and that can only mean one thing - the Liverpool Santa Dash! The biggest, the best, and the funniest in the UK, and possibly the world! I've run it every year since it started back in 2004, making me one of only a handful of runners / joggers / walkers to have completed all 12 stagings. Many of the 10000 taking part will be raising money for charity, and I'm no exception. Once again I'll be raising funds for Shyira Trust, a small charity I helped set up in 2006. Since then we've raised over £300,000 for the various projects we support. This year, I'll be supporting the building of a new maternity hospital for Shyira in Rwanda. The old one that we funded has been so successful, and has had such a positive impact on maternal health, that it is full to overcrowding, and requires a new building. Please help Shyira Trust to continue its great work by donating any amount, big or small, to this great cause. Every penny received by Shyir
Post a Comment
Read more

More details soon, but in the meantime, there's a fundraising page at myDonate
Post a Comment
Read more

By running4rwanda - November 01, 2015
After successful Run(s) and the Walk, the Ride was due to take place during September. Then, due to ill health, it was postponed until October. And then postponed for a second time due to bike problems. A second bout of illness, and the shortening days has made it impossible to plan a safe bike ride of more than 100 miles. So, with heavy heart, I have had to postpone the Ride part of the Run Walk Ride for Rwanda. Note that this is a postponement, not a cancellation, and it will take place at the earliest opportunity. There is even a possibility that it will take place in Rwanda - riding with the TeamRwandaCycling team from Ruhengeri in northern Rwanda, in February 2016. If it doesn't happen then, it will take place as soon as the days get long enough in March or April. So thank you for your support so far, and watch this space in the New Year. In the meantime, watch out for the annual extravaganza that is the Liverpool Santa Dash, on 6th December 2015
Post a Comment
Read more 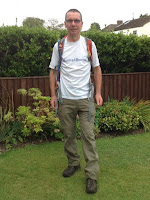 Thanks to everyone for supporting the 'Walk' leg of my Run, Walk, Ride 4 Rwanda challenge. Having done the 'Run' leg in July, I just managed to squeeze the walk into August, walking it on Monday 31st August. I caught the 6:56 train from Freshfield to Hunts Cross, then walked the near 27 miles back, mainly along the Liverpool Loop and Cheshire Lines paths. Starting walking just before 8am, I made steady progress, taking my first short break six miles later. Near Aintree, there was a short unscheduled stop when meeting a former work colleague, last met in 2001! Then more steady progress before taking a short lunch break having covered almost 19 miles in five hours. Up to this point the weather had been kind with just a few spots of rain very early on, but in the afternoon there was torrential rain, making the last 8 miles a bit slower, but still respectable, covered in less than two and a quarter hours. Thanks to everyone who has supported me, and made the journey
Post a Comment
Read more 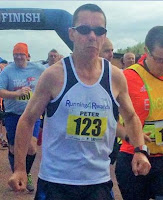 The first leg of Run Walk Ride for Rwanda is the BTR Liverpool Tour of Merseyside - itself a multi-stage event of six races in seven days Sun 5th July:   Southport half marathon - 13.1 miles Mon 6th July:  Thurstaston beach race -  6.1 miles Tue 7th July:   Sustrans 10 mile race - 10 miles    Wed 8th July:  A well-earned rest Thur 9th July: Halton 5 mile race - actually 5.1 miles Fri 10th July:  Huyton cross-country - 6 miles Sat 11th July:  Wirral coastal run - 12 miles A total of 52.3 miles, just about a double-marathon distance. The event(s) went as well as could be expected, with some good results and some not-so-good. I wasn't looking forward to the half marathon and struggled between 5 and 10 miles, but recovered to finish in 114th position. Monday was hard, especially on the beach, and I finished 118th. I felt better on Tuesday and finished strongly to take 106th. Wednesday was a welcome break, and Thursday's 5-miler was fast and furious finishing in 104th.
1 comment
Read more

After cycling in the Scottish highlands, back to running. Or more accurately, running, walking and riding. Over summer I will be completing 182 miles - the distance of seven marathons - in a series of events: Run the BTR Liverpool Tour of Merseyside: six races in seven days, totalling 52 miles - a double marathon Walk the Liverpool Loop and Cheshire Lines paths from Hunts Cross to Formby - a marathon walk Ride to Southport and on to the Forest of Bowland and back via Preston - a quadruple marathon The events will take place during July, August and September, and I will be hoping from support along the way. More importantly I will be looking for sponsorship to help fund the rebuilding of Shyira Maternity Hospital. It needn't be much - I'm not expecting a pound per mile or anything like that, although £182 would be very welcome. Even a penny per mile would be welcome! So if you want to make a difference to the lives of women and their babies in Rwanda, please spons
Post a Comment
Read more 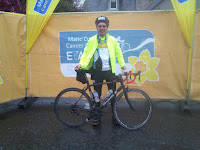 After 30 years of running, and 10 years of Running 4 Rwanda, a new challenge awaits - my first cycling even in aid of maternal health and safe motherhood in Rwanda. The Etape Caledonia is 82 miles in the Highlands of Scotland, starting and finishing in Pitlochry, Perthshire. Not much for a seasoned cyclist, but I'm not much of a cyclist, and definitely not seasoned, but I'm confident I'll get round. Please support me to help the funding of these projects in Shyira, Rwanda, by clicking the button on the right. Your support is vital, so please be generous. Thank you
Post a Comment
Read more
More posts